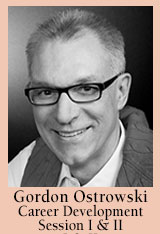 Gordon Ostrowski, Assistant Dean/Opera Producer, has served as a administrator, artistic producer, stage director, and teacher at Manhattan School of Music since 1991.

He has directed Die Zauberflote for the Tuscia Opera Festival in Viterbo, Italy in 2011 and Don Giovanni and Le Nozze di Figaro for the New Opera Festival of Rome. He has taught acting style at the Chautauqua Opera since 1998. He made his debut directing Madam Butterfly for Opera Pacific in 1991.